"Trust Yourself and Your Education": Alum Reflects on Path to DVM | Ross University School of Veterinary Medicine

“I was always caring for animals. I had pets, a passion for science, and an interest in medicine,” Dr. Greenfield says. “It kind of happened naturally.”

Dr. Greenfield, who describes himself as a “big believer in letting life happen,” started out as a veterinary technician after college at the University of Wisconsin-Madison. Then, seeking a change of scenery, he moved to southern California. 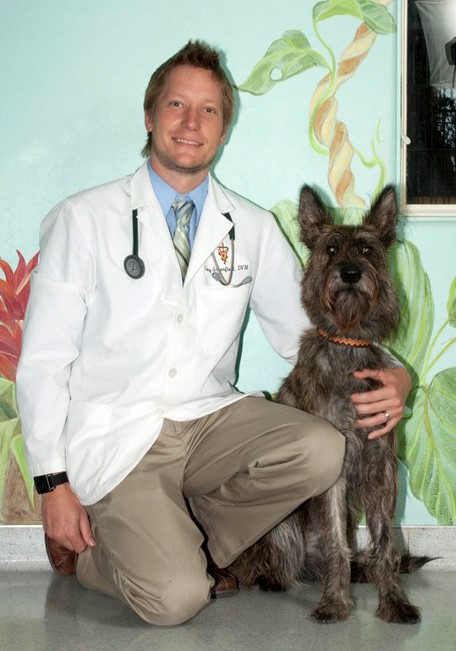 He was content during the next few years, working as a vet tech and enjoying the nearby beaches in his spare time. But he wanted more.

“I was working for the veterinarian and thought to myself, ‘If he can do it, I can do it too,’” Dr. Greenfield says.

But since Dr. Greenfield was starting the application process later than the norm, he knew it would be a long shot to get accepted to U.S. schools.

“I was older and later in the game. I had to figure out how I was going to take that next step,” Dr. Greenfield says. “I had heard good things about Ross and had respect for the program. The admissions process was very smooth. Plus the fact that I love the beach and it was on an island—it was a no-brainer.”

For Dr. Greenfield, RUSVM was a great experience—made even better because his girlfriend, who’s now his wife, was there with him. “It was really nice having her there experiencing it with me,” he says. “It was an amazing three years.”

After graduation, Dr. Greenfield had job offers in both Wisconsin and California. He chose California, where he’s been ever since. Currently, he works at the Animal and Bird Hospital of Del Mar.

“Every day has new memories. There’s always something different going on,” Dr. Greenfield says. “The gratitude from clients is very rewarding.”

Last year, Dr. Greenfield was featured in the local news after saving a dog whose owner was hit by a car and sent to the hospital with severe injuries. A 20-year-old woman was crossing a freeway on-ramp with her Chihuahua when she was struck by a car. The woman was taken to the hospital, and a Good Samaritan who witnessed the accident brought the dog to the Animal and Bird Hospital. Dr. Greenfield treated the dog for brain swelling.

His advice to new vets: Work in an environment where you feel supported, and “trust yourself and your education.”

“As a veterinarian, there’s a lot of weight on your shoulders, and it can be stressful. But the longer you work, you realize stress is natural because you care about what you do. If you want to be good, you have to care,” Dr. Greenfield says. “Do what you feel is right and trust yourself.”