Central America is perhaps not the first place one may think of when it comes to wildlife conservation. One may be surprised to discover the dwindling habitats and populations that citizens, scientists and veterinarians fight to protect on a daily basis. I was curious to discover what Central America had in store, so I set out on an adventure with my peers from Ross University School of Veterinary Medicine to experience it for myself. In April, we spent two weeks in Belize and Guatemala learning from specialists in the field. This experience was facilitated and organized by the Belize Wildlife & Referral Clinic and the Belize Wildlife Institute.

The Belize Zoo is home to many native Central American species, some victims of the illegal wildlife pet and poaching trade. From the various species of wild parrots to the Keel-billed toucan, American crocodile, Northern Tamandua and Jaguarundi, more than a few species with unfortunate stories stuck with me.

Belize is home to one of the healthiest populations of Jaguar remaining in Central America. Populations have been decimated widely due to deforestation and hunting, forcing these big cats into areas inhabited by humans. Belize Zoo is home to jaguars that are no longer releasable; some because their teeth were torn from their jaws by poachers, others following loss of food or habitat forced out of their territory where they were involved in a negative interaction. These “problem jaguars” are not releasable because they pose potential danger to people and to themselves. The Belize Zoo provides a spectacular habitat for these victim cats.

The charismatic Scarlet Macaw is one of my favourite species in Central America. It is estimated that 100-200 individual Scarlet Macaws are left alive in the tropical rainforests of Belize. It is one of the most endangered populations of animals on the planet today.

Threats to the Scarlet Macaw are greater in Belize than in other places around the world. Chicks are taken from their nests by poachers within hours after hatching. Veterinarians and rainforest rangers now plot macaw nests each season and spend weeks guarding the nests. To prevent poachers from stealing the chicks, the team removes the chicks from their nests after they have hatched for relocation to places of refuge. There they are reared under the watchful eye of caretakers specializing in the conservation of this species.  Each year, the team releases the reared fledglings back into the wild who otherwise would have been victims of the illegal parrot trade if left alone to the mercy of poachers. In 2015, fifteen fledglings were released back into the wild.

At the Belize Bird Rescue, we met hundreds of birds, victims of the illegal pet trade, condemned by the Belizean government. These birds have found a place of refuge where they will live out their lives. We attended a film screening for endangered wild parrot conservation efforts and awareness in Central America. It became evident to me just how dangerous and destructive wildlife trade is, not only for the animals involved, but for the individuals and families involved, struggling to survive in an unforgiving economy.

At the Belize Wildlife & Referral Clinic, we learned techniques in blow darting and practiced handling, husbandry and procedures for birds, mammals and reptiles. Diagnostic techniques including autopsy, parasite screening, physical examinations and radiology were a substantial portion of our experience in the hospital.

These experiences provided us a greater appreciation for the anatomical biodiversity found among the various species we treat, and the associated adaptability acquired as a Doctor of Veterinary Medicine. Time and time again, we were reminded of unfortunate consequences resulting from human-wildlife interactions.

In addition to administering oral medications and injections, wrapping wings, and tube feeding an emaciated, injured seven-foot American crocodile, our experience with the Crocodile Research Coalition in Belize was unforgettable. Midnight croc shining for capture and release to obtain morphometric data culminated in events similar to those one might expect on an adventure with the late Steve Irwin. It was one of the most adrenalin-filled experiences I’ve ever taken part in.

At The Iguana Project, we participated in husbandry for sixty green iguanas who live out their lives in a sanctuary away from the poaching dangers of the rainforest. The iguanas of Belize are on the brink of extinction due to demands for leather and meat, in addition to the misconception that these creatures are harmful to humans.

At Parque Nacional Yaxhá in Guatemala, we explored Mayan archaeological sites and enjoyed the opportunity to discover another country and its culture. We travelled across Lake Peten Itza in Flores, Guatemala to meet the team at ARCAS, asociaciòn de rescate y conservaciòn de vida silvestre. The team of conservationists, veterinarians, students and volunteers working to protect and rehabilitate threatened species in scorching temperatures around the clock are true warriors of our time.

As an avid diver with a passion for the underwater world, I was thrilled to spend a day at sea. From Placencia, Belize, we travelled to Gladden Spit and Silk Caye Marine Reserve, a one hour and thirty minute sail culminating 26 nautical miles.

Far offshore we happened upon an oasis, Silk Caye Marine Reserve, a protected marine area home to the endangered whale shark and loggerhead sea turtle. We spent a full day diving and snorkeling around the caye, discovering coral restoration farms and a plethora of colorful fishes and invertebrates. Dolphins swam around the caye and frigate birds, gulls and terns soared above. For me personally, Silk Caye is the most beautiful place that I’ve discovered on earth through my travels to date. Diving and snorkeling with nurse sharks was thrilling; they were very interested in my camera and repeatedly swam in close to check it out. It is well known that Belize ranks in the top ten dive destinations in the world, and for good reason. The pristine barrier reef thriving and teaming with endangered coral colonies, sharks, turtles, triggerfish; the list goes on...

Amongst our various excursions, lectures and workshops, we were able to fit in an early morning bird watching tour, a late night amphibian and reptile identification tour, a day in the Belizean Mountains spent cliff jumping into a waterfall pool, paddleboard yoga and races around an island on Lake Peten Itza, and of course enjoyed the local cuisine! I met many colleagues and friends that will last a lifetime. I urge you to discover Central America for yourself! The adventure awaits you.

To experience Belize for yourself, please visit: 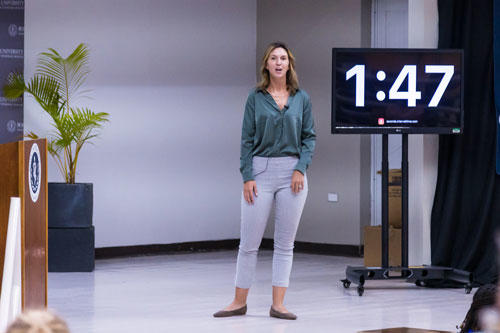