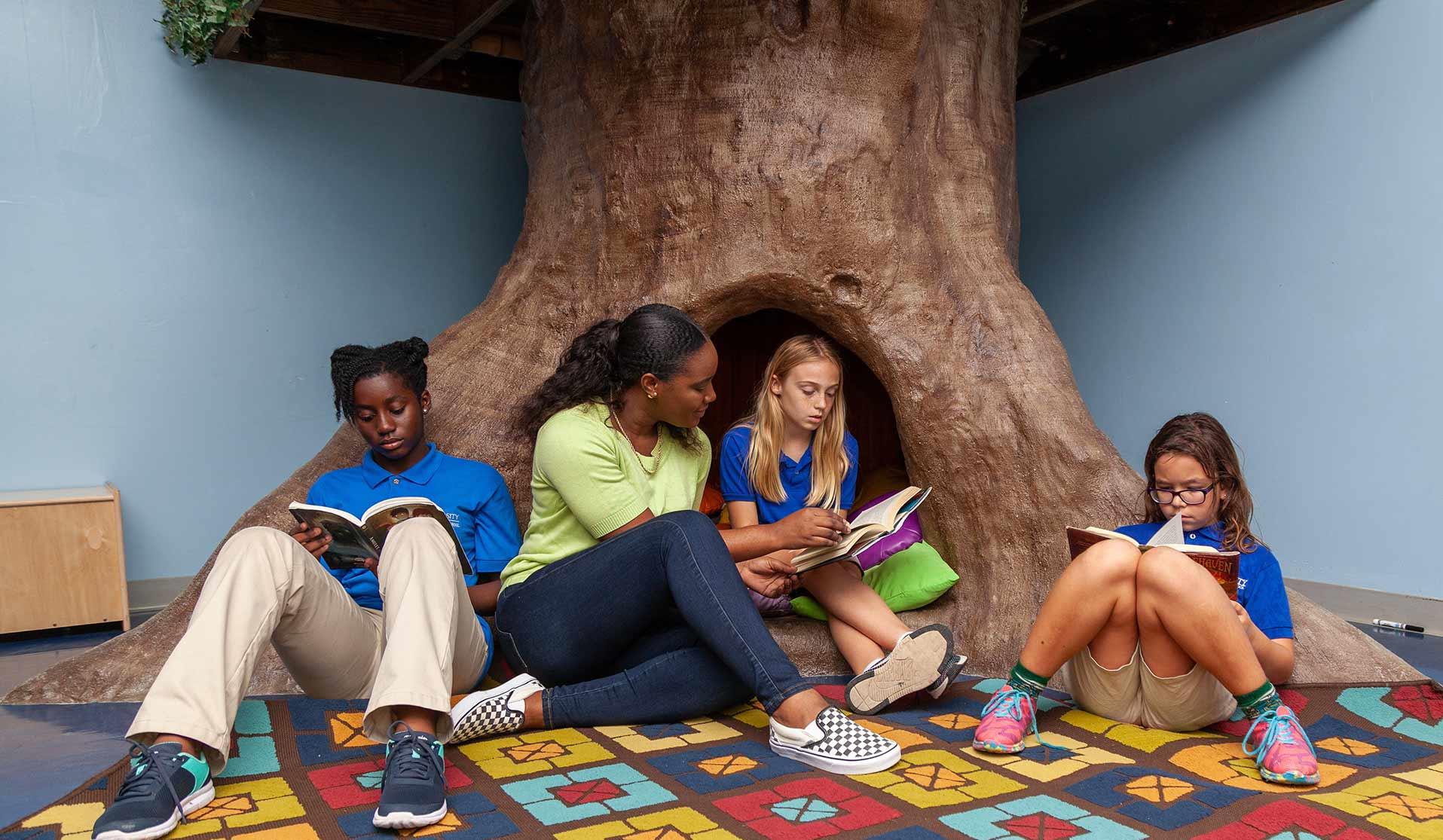 Each year the International Day of Peace is observed around the world on 21 September. This is a day devoted to strengthening the ideals of peace, both within and among all nations and peoples. This year students at the Prep School participated in the International Day of Peace for the first time It will become an annual celebration. They spread the message of peace throughout the RUSVM campus handing out notes that listed ways to make the world a more peaceful place. They also left notes and bookmarks on cars across campus.

A few years ago, during Summer Camp, the RUSVM Prep School students learned of a single mother with four children moving from downtown Basseterre to an unfurnished one-bedroom apartment in the St. Kitts countryside. Seventh and eighth grade students volunteered to assist with the move. During the move, it was discovered that the family had only one set of single bunk beds (which was considered inadequate for the size of the family) and no other furniture. With the help of students and volunteers, the family, in two days, acquired a washing machine, a brand new bunk bed with a double mattress below and single above, kitchen stove, table, overstuffed chair, desk, bookcase, computer, dishes, pots and pans, small electrical appliances, sheets, clocks, and other household goods.

At the family's previous home in Basseterre, the students gathereed to carry boxes and suitcases downstairs and load them into vehicles. Upon arrival at the new location, the students unloaded the belongings and assisted in arranging the items in the appropriate places throughout the home. Students provided additional assistance to Mr. Jonathan Peeler, RUSVM Senior Facilities Manager, and to their teachers, as the team assembled the beds and arranged the furniture. Mr. Peeler also installed the stove and washing machine while Long Duong set up the computer.

When the younger students learned about the project, they were eager to get involved and decided to purchase food from the grocery store to stock the refrigerator.

The family was shocked and delighted—impressed that the students were willing to assist with the move of their household goods, but had no idea that they had also accumulated all the other items as a surprise.

The day was a fantastic experience for the family, but even more so for the students and their teachers.

Teachers and students at the RUSVM Preparatory School have partnered with Bronte Welsh Primary, a local school in St. Kitts. The Minister of Education approached RUSVM for assistance for the school, which is located near our campus. Over the years, the university has built a library, donated televisions, copy machines, books, school supplies, and other items to the school.

During the 2009-2010 school year, RUSVM Preparatory School students visited Bronte Welsh to read to their students and participate in holiday activities. In addition, in early 2010, our first and second grade teacher, who was a reading specialist, conducted an in-service training for the Bronte Welsh teachers.

Students at the Preparatory School have been supportive of the St. Kitts Sea Turtle Monitoring Network at Ross University School of Veterinary Medicine under the direction of Dr. Kimberly Stewart, assistant professor of Special Species. Many of the students have participated in a night watch with the veterinary students and observed or assisted in measuring the turtles, counting eggs and marking the location of the nests.

To support the turtle monitoring project, the students decided to create calendars to sell as a fundraiser for the organization. Students as young as Preschool age were involved with taking photographs in St. Kitts and submitting them to be judged for inclusion as a picture selected for one of the months. Calendars were sold to the RUSVM community and to visitors from cruise ships. The students were able to develop their communications skills as the interacted with tourists, explaining the sea turtle monitoring project and promoting conservation.

During the 2009-2010 school year, the students donated a check to the St. Kitts Sea Turtle Monitoring Network for ECD $6480.00 as a result of their fund raising efforts.

During the 2008-2009 school year, our first and second grade teacher, Ms. Kate, started a Nothing But Nets fundraising project as a social studies unit on economics. Part of that unit focused on charity and giving to those in need. She wanted to find a cause to which the students could relate. She learned about the Nothing But Nets campaign. She was impressed by the fact that in supporting this cause, kids would be helping other kids. This cause also required that the students learn about Africa and malaria. Students surprised her with how interested they were and how eager they were to get involved. They were particularly struck by the fact that a child dies from malaria every 30 seconds. Most of the students were familiar with dengue fever because it can be a threat in the Caribbean and they hear their parents talking about it. They were also fascinated by the fact that a disease can be passed by mosquitoes. They were excited to learn that bed nets were relatively inexpensive and, for this reason, felt they could really help.

As a part of our unit, Ms. Kate had hoped for them to earn a little money to donate. Together, they planned a “pancake and pajama” day and invited students from other grades at the Prep School to wear their pajamas to school and purchase a pancake lunch. The first and second graders presented what they had learned about malaria at a morning assembly and encouraged other students to participate. They were delighted when they raised almost $300 US from the pancake lunch.

Excited by the success, the kids expressed an interest in continuing to fund raise. They then cooked and sold baked ziti as a school lunch, which was also very popular. After these fund raisers, other teachers and students at the Prep School expressed an interest in becoming involved in the project. As a school, we organized a bake sale on the main campus of the vet school. Students, parents and teachers at all grade levels donated baked good to sell. The baked sale was a great success with young students working at the tables, interacting with the vet students and collecting the proceeds.

In the end, the students raised $2,772.43 US dollars to donate to Nothing But Nets which is enough to purchase 277 bed nets. We are very proud of the kids; all they have learned and the interest they have shown in helping others and have saved lives in the process.

Upon hearing of the earthquake in Haiti, RUSVM Preparatory School students rallied together to provide relief for victims of the tragedy. They wanted to actually do something, not just donate money from their parents.

On January 20, 2010, students held a car wash and raised EC $3,121.40. Students in pre-kindergarten and kindergarten wanted to be involved as well, so they opened a lemonade stand in front of the school and sold lemonade to veterinary students who walked past the prep school during the car wash. They earned EC $326.06.

On January 25, 2010, some of the students made soup and cheese biscuits with Ms. Lonnie and offered lunch to students and teachers for EC $5 the next day, bringing the total amount for their efforts to EC $313.50.

In addition, one of the daycare parents painted a picture that brought in EC $300 through a silent auction, bringing the total amount earned to EC $4,060.96.

The money was channeled through the American Association of Schools in South America, along with dozens of donations from other international schools. The RUSVM Preparatory School is happy to know that 100 percent of this donation was able to go directly to Haiti for needy victims.

Three cheers for our super students!

We welcome children of all ability, gender, national origin, and race.