His First Five Months in Office, the 2022 AVMA Summit, and Hispanic Representation

When Ricky Alvarez, class of ’25, took over as President of Ross University School of Veterinary Medicine’s (Ross Vet) chapter of the Student American Veterinary Medical Association (SAVMA), he came into the position representing the student body with excitement for the goals and vision he and his executive board set out to achieve. With a full summer semester and all of September behind him, he reflected on what the first few months has taught him:

“Well, It could only get better from the very beginning because it definitely took some time to adjust to the responsibility,” said Alvarez. “But the adjustment was made, and it has only been a blessing from there. I knew about the workload, but truthfully I did not think I was going to be learning as much as I have. I feel like the connections between SAVMA, students, and faculty have already become stronger. I feel the confidence and support from the student body as well as my executive board. Everybody is working so hard, however, it does not feel like hard work because it is truly an honor, a privilege, and a blessing. We all know that this is something that we have always wanted to do, and these are important positions to be in.”

Seeking out learning opportunities in his leadership position brought Alvarez to Chicago, Illinois in September for the American Veterinary Medical Association 2022 Summit. “The AVMA showed just how welcoming the association can be and how much they care about Veterinarians and Veterinary students. I got to meet with SAVMA presidents from all the AVMA accredited Universities as well as the other international schools and learn how they operate compared to Ross Vet, which was interesting to learn. An astonishing difference was how Ross Vet integrates SAVMA into the student government as well as including AVMA dues in tuition, unlike other schools that must advertise and recruit for AVMA membership. Ross students are automatically members, so we can focus our time on providing for the student body instead of recruiting them.”

Alvarez came to Ross Vet as a first-generation American whose family emigrated from Cuba to Miami, Florida. His father has been living in the United States since he was three years old, but his mother did not move until she was 17, which created some barriers to learning English and adjusting to a new life. His grandparents shared similar struggles coming to the United States in their 30s, but young Alvarez learned a lot being raised by his parents and grandparents in Miami. “My grandparents would babysit me, and I would often go to work with them cleaning houses and university buildings at Miami-Dade College and Florida International University,” recalled Alvarez. “From a young age I saw what it took to work hard and be raised by hard-working individuals, but I also learned that although hard work does pay off, it is not created equal for everyone, and that is an important thing that you learn in Hispanic culture.”

Hispanic representation in veterinary medicine is inadequate, with just 4.6% of veterinarians identifying as Hispanic or Latinx (Source). Alvarez was surprised to realize the reality of how low that number is but knows there is hope for increased representation with future generations – 14% of current Ross Vet students identify as Hispanic or Latinx, nearly triple the number of active Hispanic or Latinx veterinarians. “I am shocked to hear that number, but the Ross Vet population demographic just goes to show that Ross Vet sees what the profession is experiencing in underrepresentation and the great opportunity for future veterinarians of all backgrounds, not only Hispanic and Latinx populations. The important message that Hispanic heritage month brings to me is that it reminds me of all the beauty my culture has, the amount of work it took to achieve that, and how I must continue working hard in order to create more beauty for the Hispanic heritage” 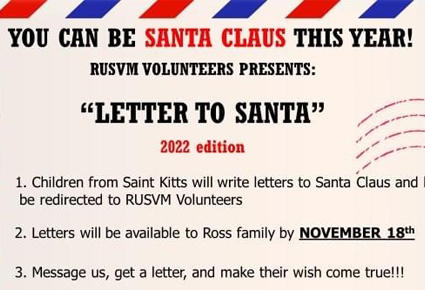