This Student Didn’t Give Up. Now She’s On Her Way to Her DVM. | Ross University School of Veterinary Medicine 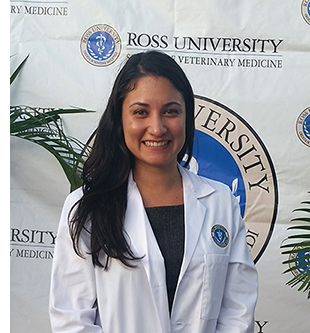 “They looked so sick and emaciated,” says Jovel, who grew up with puppies of her own. “That’s when I decided I wanted to help animals.”

Now, Jovel is on her way to doing just that at Ross University School of Veterinary Medicine (RUSVM). A first-generation college student whose parents emigrated from El Salvador, she is a recipient of the Eliza Ann Grier Scholarship, awarded to underrepresented minority students who demonstrate strong personal qualities of motivation and integrity as well as academic excellence.

Jovel graduated from the University of California at Davis in 2008 with a degree in wildlife fish and conservation biology. She had originally planned to major in animal science, but a visit to the campus wildlife museum got her hooked.

There, she had the opportunity to do a variety of internships and fieldwork, including a wood duck survey in the surrounding area; snake, reptile and herpetology surveys in Washington; and bird surveys in Chile. It was a far cry from the inner-city environment where she grew up.

“I love soaking in nature and being outdoors,” Jovel says. “When I was younger, I was never really exposed to nature in that way. Being able to poke around in everything and immerse myself helped me appreciate my surroundings and the animals.”

After her first round of applications to U.S. vet schools didn’t pan out, Jovel refused to be deterred.

“I said, okay, maybe I need a little more experience,” she says.

Over the next several years, she gained far more than just “a little” experience. Jovel spent two years earning her associate’s degree from Los Angeles Pierce College to be a vet tech. After graduating, she worked at Los Alamitos Animal Hospital, eventually becoming one of the lead vet techs and specializing in emergency medicine, right up until she left for vet school.

Now, having been on island in St. Kitts for about three months, Jovel is confident she made the right choice. “I love it here,” she says. “I’m happy I made the decision to come.”